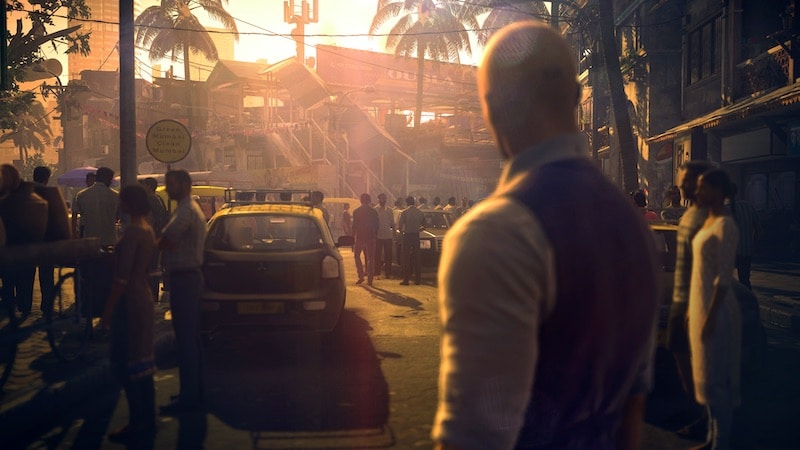 Hitman 2 is the sequel to 2016’s fun but poorly optimised Hitman. While the long-running series has had a solid fan base in India, Hitman 2 will have a level based on Mumbai. And if you were expecting anything more than a cliche, think again. Hitman 2 developer IO Interactive took to its site to reveal that not only would the adventures of protagonist Agent 47 take him to Mumbai, but it would deal with two of the most done to death elements of the Indian city – slums and Bollywood.

“Nicknamed ‘City of Dreams’, Mumbai is a treat for any visiting traveler or agent on a mission,” a post from IO reads. “Lose yourself in the crowds of the city’s famous slums or admire Bollywood movie locations from afar; Mumbai will not disappoint with its colorful life and countless hidden secrets.”

That said, IO have got certain details down to a pat, such as the city’s black and yellow cabs and ‘Green Mumbai Clean Mumbai’ signs that you can see in the screenshot above. This isn’t the first time we’ve seen video games incorporate parts of India. Notable examples include the superlative Uncharted: The Lost Legacy that had some fantastic explanations of Hindu mythology and Ubisoft’s Splinter Cell: Blacklist had a cooperative mission set in a Bengaluru army base complete with eerily authentic swearing. Even Capcom’s Street Fighter series has represented India too.

As for Hitman 2 itself, IO claims it will take you to rainforests and sun-drenched streets in search for the elusive Shadow Client in an attempt to put an end to his militia. However when Agent 47 “learns his target’s true identity and the truth about his past, it changes everything” the description hints. Here’s everything else you need to know.

Hitman 2 pre-order bonuses
Pre-ordering the Hitman 2 Gold Edition nets you four day early access. Pre-ordering any version of the game gets you immediate access to the co-op Sniper Assassin Mode.