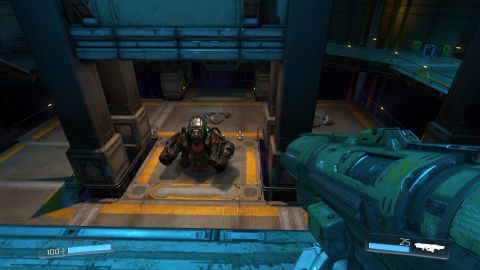 This was bound to happen. Hell, it’s not like I haven’t been thinking about it myself, in between hammering together my current SnapMap projects. Someone has built a version of Destiny’s King’s Fall raid in Doom’s content creation suite.

Coming in three parts – with the final battle against Oryx presumably in production – the project is the work of a player called SharkTurd11, a name that is not only brilliant in its own right, but which logically leads me to believe that there must be 10 other ShardTurds in existence somewhere, a thought that makes me very happy indeed.

Now obviously a few things have had to be changed or stripped down to make Bungie’s vast, professionally developed raid work within the pre-set structural pieces of SnapMap. The chief difference is that the raid has been adapted to work for a single player rather than a co-ordinated, six-person team, but amendments have also had to be made to work around the lack of thundering great Hive ships to jump across and massive, biomechanical architecture to negotiate. And the explodable goo nodes that spur on the Golgoroth boss fight have been replaced with Lost Souls.

That said, it’s a pretty good analogue for King’s Fall, with the raid’s fundamentals translated rather well into Doom’s systems, and marvelously so in places. It’s also brutally hard at times but, as is the way with all SnapMaps, if you download it rather than streaming it, you can open it up in your own editor and start making any changes and modifications to it that you like. Want up lower the difficulty or add more checkpoints? Have at it. And obviously, a great number of bonus points to anyone who makes a workable multiplayer version of this.

If you want to play it for yourself, then the codes you need are as follows.

Want more SnapMaps to play with?