Samsung Galaxy A7 (2018) – the company’s first smartphone with triple rear cameras – will be launched in India at an event the company is hosting in New Delhi today. The smartphone was unveiled globally last week and sports three camera sensors on the back – one depth of field lens, one wide-angle lens, and one autofocus lens. Other key features of the smartphone include AR Emojis, a full-HD+ Super AMOLED Infinity Display, Dolby Atmosaudio technology, and a side-mounted fingerprint sensor. As a successor to the Galaxy A7 (2017) that arrived in the country in March last year, the new Galaxy A7 (2018) also features a 24-megapixel sensor in the front that also features Selfie Focus and Pro Lighting Mode. 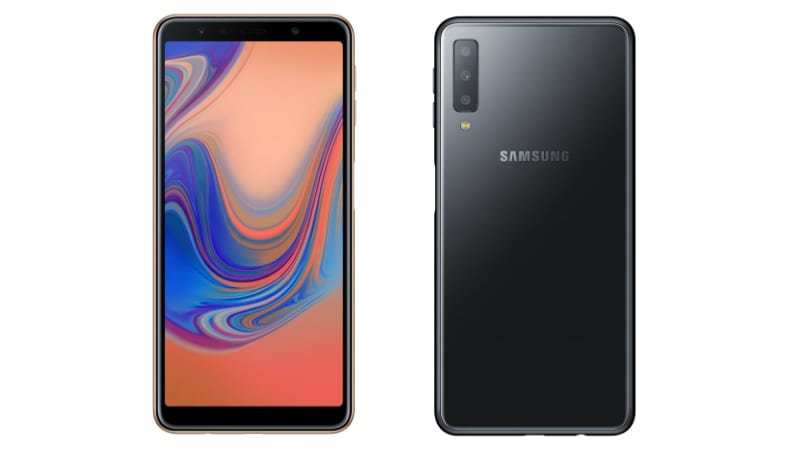 The Samsung Galaxy A7 (2018) price in India will be the draw of the event considering the specifications and features are already known. The release date and launch offers for the handset will also be unveiled at the event. The new Samsung Galaxy A7 (2018) will be available via Flipkart in the country, with a dedicated web page already set up for the smartphone on the e-commerce site.

The dual-SIM (Nano) Samsung Galaxy A7 (2018) runs Android 8.0 Oreo along with Samsung Experience UX on top and sports a 6-inch full-HD+ (1080×2220 pixels) Super AMOLED Infinity Display along with an 18.5:9 aspect ratio. It is powered by an octa-core SoC clocked at 2GHz, paired with 4GB and 6GB RAM options. The triple rear camera setup of the Galaxy A7 (2018) has a 24-megapixel autofocus sensor with f/1.7 aperture, an 8-megapixel ultra wide sensor with f/2.4 aperture, and a 5-megapixel depth sensor with fixed focus and f/2.2 aperture. For selfies, there is a single 24-megapixel fixed-focus camera sensor at the front along with an f/2.0 aperture and an LED flash.

For storing content, the Galaxy A7 (2018) has 64GB and 128GB of onboard storage options that both are expandable via microSD card (up to 512GB). Connectivity options on the smartphone include 4G VoLTE, dual-band Wi-Fi 802.11ac, Bluetooth v5.0, ANT+, NFC (subject to region) with Samsung Pay support, GPS, GLONASS, Beidou, and a 3.5mm headphone jack. Sensors onboard include an accelerometer, gyroscope, proximity sensor, RGB light sensor, and a side-mounted fingerprint sensor. Besides, the smartphone packs a 3,300mAh battery and measures 159.8×76.8×7.5mm. It will be available in Blue, Black, Gold, and Pink colour options.